Finding a great quote about coaching can turn your day around, give you a new breath of motivation, or even become an idea you hold onto for years to come. We appreciate that with your busy lives, few have time to trawl the internet hoping to find a quote that you connect to. So at Athlete Assessments, we have taken the time to compile this list of fantastic quotes by great Coaches! Please send us your favorite coaching quotes using the box below so we can add it to this page for everyone’s benefit. And come back soon, for updates and more inspiration…

We hope you find this compilation relevant, inspirational and valuable!

“Success is peace of mind which is a direct result of self-satisfaction in knowing you did your best to become the best you are capable of becoming.”
John Wooden, Basketball
“The interesting thing about coaching is that you have to trouble the comfortable, and comfort the troubled.”
Ric Charlesworth, Hockey
“Winning is not a sometime thing; it’s an all-time thing. You don’t win once in a while, you don’t do things right once in a while, you do them right all the time. Winning is habit.  Unfortunately, so is losing.”
Vince Lombardi, American Football “Most people get excited about games, but I’ve got to be excited about practice, because that’s my classroom.”
Pat Summitt, Basketball

“Selecting the right person for the right job is the largest part of coaching.”
Phil Crosby

“To be as good as it can be, a team has to buy into what you as the coach are doing. They have to feel you’re a part of them and they’re a part of you.”
Bobby Knight

“You don’t demand respect, you earn it.”
Steve Seidler

“The only place that success comes before work is in the dictionary.”
Vince Lombardi, American Football (Contributed by Mark Cook)

“It’s what you learn, after you know it all, that counts.”
John Wooden, Basketball “Attitudes are contagious. Are yours worth catching?”
Anonymous (Contributed by Carol Jones)

“Victory or defeat is not determined at the moment of crisis, but rather in the long and unspectacular period of preparation.”
Anonymous

“The [best] coaches… know that the job is to win… know that they must be decisive, that they must phase people through their organizations, and at the same time they are sensitive to the feelings, loyalties, and emotions that people have toward one another. If you don’t have these feelings, I do not know how you can lead anyone. I have spent many sleepless nights trying to figure out how I was going to phase out certain players for whom I had strong feelings, but that was my job. I wasn’t hired to do anything but win.”
Bill Walsh, American Football

“A coach should never be afraid to ask questions of anyone he could learn from.”
Bobby Knight, Basketball

“A common mistake among those who work in sport is spending a disproportional amount of time on “x’s and o’s” as compared to time spent learning about people.”
Mike Krzyzewski, Basketball

“Failure is never quite as frightening as regret.”
Anonymous (Contributed by Dean Bosnich) “Let me tell you what winning means…. you’re willing to go longer, work harder, give more than anyone else.”
Vince Lombardi, American Football

“All coaching is, is taking a player where he can’t take himself.”
Bill McCartney, American Football

“I found out that if you are going to win games, you had better be ready to adapt.”
Scotty Bowman, Hockey

“I want my team to be more detached from the wins and losses and be more focused on doing the little things well. When you focus on getting the win, it can suffocate you, especially during the playoffs when the pressure gets thick.”
Sue Enquist, Softball

“An acre of performance is worth a whole world of promise.”
Red Auerbach, Basketball

“I think the most important thing about coaching is that you have to have a sense of confidence about what you’re doing. You have to be a salesman and you have to get your players, particularly your leaders, to believe in what you’re trying to accomplish on the basketball floor.”
Phil Jackson, Basketball “Good teams become great ones when the members trust each other enough to surrender the ‘me’ for the ‘we’.”
Phil Jackson, Basketball

“I’d say handling people is the most important thing you can do as a coach. I’ve found every time I’ve gotten into trouble with a player, it’s because I wasn’t talking to him enough.”
Lou Holtz, American Football

“Nothing great was ever achieved without enthusiasm.”
Bobby Knight, Henry David Thoreau

“Champions keep playing until they get it right.”
Billie Jean King, Tennis

“There is another side [to ego] that can wreck a team or an organization. That is being distracted by your own importance. It can come from your insecurity in working with others. It can be the need to draw attention to yourself in the public arena. It can be a feeling that others are a threat to your own territory. These are all negative manifestations of ego, and if you are not alert to them, you get diverted and your work becomes diffused. Ego in these cases makes people insensitive to how they work with others and it ends up interfering with the real goal of any group efforts.”
Bill Walsh, American Football “If we were supposed to talk more than we listen we would have two mouths and one ear.”
Mark Twain

“Nothing will work unless you do.”
– John Wooden, Basketball

“Good coaching may be defined as the development of character, personality and habits of players, plus the teaching of fundamentals and team play.”
Claire Bee, Basketball

“The absolute bottom line in coaching is organization and preparing for practice.”
Bill Walsh, American Football 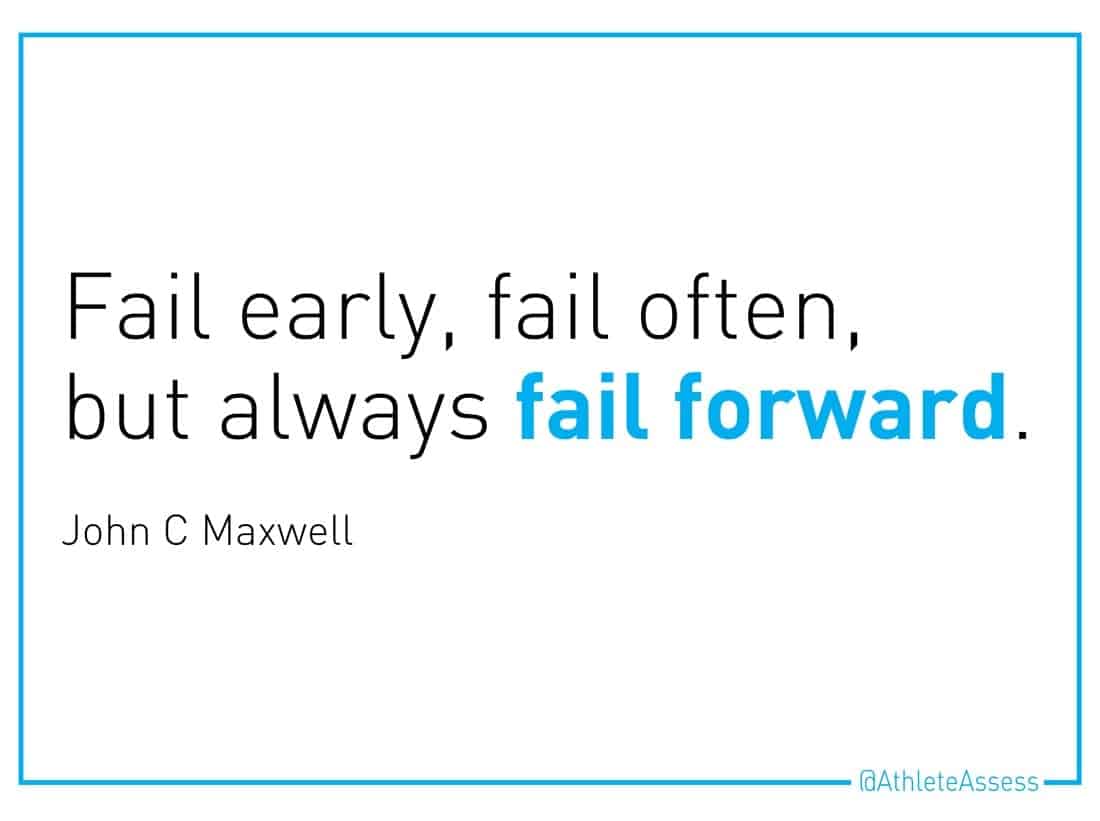 “Coaching is people management – getting people to do what you want them to do and like doing it.”
Anonymous

“Winning isn’t everything, it’s the only thing. If you can shrug off a loss, you can never be a winner!”
Vince Lombardi, American Football (Contributed by M. Newbury)

“The best motivation always comes from within.”
Michael Johnson (Contributed by Robin Clarkson)

“It is not what the coach knows; it is what his players have learned.”
Anonymous

“The definition of courage is going from defeat to defeat with enthusiasm.”
Winston Churchill

“If you have something critical to sat to a player, preface it by saying something positive. That way when you get to the criticism, at least you know he’ll be listening.”
Bud Grant, American Football

“As the leader, part of the job is to be visible and willing to communicate with everyone.”
Bill Walsh, American Football “Two cars parked side by side. One is a supercar, the other is an old family sedan. Both have the same potential until someone gets in to the supercar and drives it flat out. The coach can have the best strategy but unless its driven its potential means nothing.”
John Schuh (Contributed by John Schuh)

“People thrive on positive reinforcement. They can take only a certain amount of criticism and you may lose them altogether if you criticize them in a personal way… you can make a point without being personal. Don’t insult or belittle your people. Instead of getting more out of them you will get less.”
Bill Walsh, American Football

“The real winners are the people who look at every situation with an expectation that they can make it work or make it better.”
Pletcher “I have learned over the years how to hold a team together. How to lift some men up, how to calm others down, until finally they’ve got one heartbeat, together, a team.”
Bear Bryant, American Football

“I enjoy winning and very much dislike losing – but I did not allow either of them to obsess me. I was a silent loser, believing that if you won you said little, and if you lost you said even less.”
Paul Brown, American Football

“It is not the strongest of the species that survives, nor the most intelligent, but the one most responsive to change.”
Charles Darwin

“The more I have been involved in Football, the more I realize that individual talent is minimized or maximized by the environment those blokes go into.”
Leigh Matthews, Australian Football League

“Innovation involves anticipation. It is having a broad base of knowledge on your subject and an ability to see where the end game is headed. Use all your knowledge to get their first. Set the trend and make the competition counter you.”
Bill Walsh, American Football

“Failure is only the opportunity to begin again more intelligently.”
Henry Ford “Make sure that team members know they are working with you, not for you.”
John Wooden

“My responsibility is leadership, and the minute I get negative, that is going to have an influence on my team.”
Don Shula

“You don’t win with X’s and O’s. What you win with is people.”
Joe Gibbs

“The key is not the will to win. Everybody has that. It is the will to prepare to win that is important.”
Bobby Knight

“When people ask me now if I miss coaching UCLA basketball games, the national championships, the attention, the trophies, and everything that goes with them, I tell them this: I miss the practices.”
John Wooden “Don’t ever ask a player to do something he doesn’t have the ability to do. He’ll just question your ability as a coach, not his as an athlete.”
Lou Holtz

“A common mistake among those who work in sport is spending a disproportional amount of time on “x’s and o’s” as compared to time spent learning about people.”
Mike Krzyzewski

“Our emphasis is on execution, not winning.”
Pat Summitt

“The general feeling is, if you don’t treat everyone the same you’re showing partiality. To me, that’s when you show the most partiality, when you treat everyone the same. You must give each individual the treatment that you feel he earns and deserves, recognizing at all times that you’re imperfect and you’re going to be incorrect oftentimes in your judgment.”
John Wooden

“I’ve never felt my job was to win basketball games – rather, that the essence of my job as a coach was to do everything I could to give my players the background necessary to succeed in life.”
Bobby Knight “Today I will do what others won’t, so tomorrow I can accomplish what others can’t.”
Jerry Rice

“There may be people that have more talent than you, but there’s no excuse for anyone to work harder than you do.”
Derek Jeter

“A Champion, is one who will accept a defeat graciously, and a victory with humility.”
Tino Did we miss your favorite quote?
Be sure to send it to us using the form below so we can include it in this article!

Send us your favorite quote!

Send us an email with your favorite quote, the author of the quote, and your name to have your feedback featured on this page.

Coach[at]athleteassessments.com (replace the [at] with an @ – we write it like this to avoid spam!)

If you enjoyed this page and are looking for some more inspiration, you may also be interested in our articles on Coaching Philosophy Examples or our Recommended Reading List.

At Athlete Assessments, we’re here to provide you with excellence in service and here to help you be your best. If there is anything we can assist you with, please contact us.