In a revealing interview with Rowperfect, who have a YouTube channel dedicated to rowing, Bo Hanson, four-time Olympian and triple Olympic medalist talks conflict resolution, the pointy end of his work on the people side of sport. The interview covered a great deal of Hanson’s sporting and professional experience including; fostering independence in athletes, communication amongst team members and that Olympic final which saw just 1.37 seconds between all podium finishers including Hanson and 5 times Olympic gold medalist Sir Steven Redgrave. But, it’s his comments on conflict resolution, which are most interesting.

No stranger to conflict within teams, Hanson doesn’t see conflict as the downfall of a team or even a crisis, but instead as a by-product of the diversity within a successful team. Different personalities bring different opinions and while team members may share values and common goals their individual behavior is bound to be different.

Bo Hanson now Senior Consultant for Athlete Assessments, the company he established upon retirement to specialize in the people side of sport says, “people’s outlooks, ways of doing things and ultimately opinions, must be different, as frustrating as this may be at times, the fact is that diversity always delivers better outcomes, but only if the team can manage the differences. For me, this only occurred after I learnt about DISC, the framework for valuing different behavior.

“I discovered how my behavior was not always right, nor wrong, just what I, for whatever reason, preferred to do. There is a time and place for most behaviors. Choosing the most effective behavior is the challenge.” 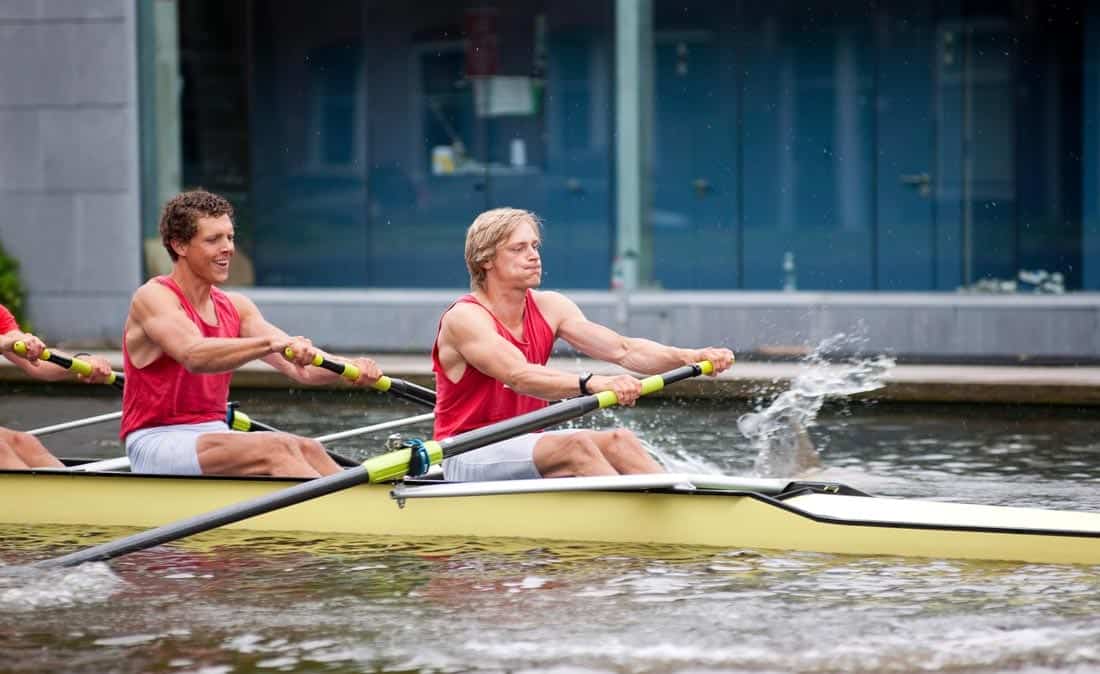 Hanson built on this understanding explaining that conflicts about process can often be resolved by focusing on a team’s shared goal. Using the result that everyone’s agreed to can be used to resolve disagreements over the way things are done.

He adds, “through DISC and the awareness this developed in me, I learnt I could develop new behaviors to deal with situations, where previously I would have engaged or others in the team would have created conflict.”

“Eventually, I arrived 100% at the point where I not only enjoyed the differences in my team members behaviors, but most critically, I witnessed firsthand how they help the boat go faster.”

Cultivating behavior that contributes to optimum performance is what makes Hanson so successful as a Coaching Consultant. In the last five years alone, his ability to improve Coaching strategies and performance with clients has resulted in over 18 National Championships in Division I College Teams in the USA, Olympic medals and Pro Team Premierships.

Hanson says, “this valuing of difference has to date been one of the most interesting aspects of helping teams perform better. It doesn’t just happen though. Learning to see difference as a benefit and something which adds value to the team takes effort and maybe even the undoing of years of conditioning which programs many people to see difference as ‘negative’”.

DISC Behavioral Profiles are a non-confrontational entry point into this conversation with a team. Through the DISC process, each team member, whether they are an athlete, a Coach or a sports administrator, learns to understand themselves, their own behavior, their natural way of doing things and what they’ll usually do under pressure or in situations that challenge them. (Athlete Assessments’ DISC Profiles are the only available that are specific to sport with the AthleteDISC Profile for athletes, CoachDISC Profile for coaches and trainers and the Sports ManagerDISC Profile for team managers, sport administrators and other sports professionals.)

Importantly, they also learn about the other players’ behavioral profiles. Why they’re different, how they’ll typically behave and what they contribute to the team. Critically, by understanding the mechanics of each behavioral type they’ll know what’s important to each other and the most effective way to disagree and still get an outcome.

Fundamentally, the model measures four areas of behavior and uses the letters D, I, S, C to describe this behavior. D is for Dominance, I is for Influence, S is for Steadiness and C is for Conscientiousness. Briefly, here are some core behaviors of each letter (style). Influence (I): are faster paced (movement, talking, deciding), more direct (to the point), people orientated (seek out and enjoy the company of others) and personally more open (disclose personal information readily).

Steadiness (S): are slower paced (slower to move, talk and respond), more indirect (take time to get to the point and gives detailed information), relationship orientated (want to get to know you) and personally more open (will disclose personal information).

Conscientious (C): are slower paced (slower to move, talk and respond), more indirect (take time to get to the point and gives detailed information), task orientated (wants to do things the right way first time) and personally more guarded (do not disclose personal information readily).

When each team member takes an Athlete Assessments DISC Profile survey, they receive a Report showing them how to maximize their behavioral strengths as well as pointers to areas where they may need to do some work. With this knowledge comes the power to communicate with other behavioral types, identify relationships that are critical to optimum performance and develop strategies to strengthen them.

The important concept about DISC Profiles is that they focus on behavior, which is flexible rather than personality, which is not.

Once an individual gains an understanding of the DISC process they can begin to find other ways to resolve differences before they become conflict. Athletes and sports professionals alike will not only communicate better, but they’ll begin to make the most of different people’s skills, valuing every person they come across for what they have to offer. Hanson confirmed this process adding, “personally, I’m internally satisfied by the way I can seek out difference, knowing that we all approach tasks and relationships differently. Rowing was a very practical demonstration of the DISC facts.

Hanson concludes that, “everyone adds value in their own unique way. A Coach’s primary role is to channel this difference into boat speed or points on the scoreboard. Understanding behavioral types through DISC is something a Coach can learn and must if they are to be accepted and respected in today’s sporting and global environment.”

Where to from here…

If you’ve enjoyed this article, you may also be interested in some of these topics too: