There are instances in sport when a coach will experience a significant break-through with an athlete, or an intense moment of satisfaction when something goes exceptionally well. We describe these instances as “coaching moments”. And although they are often fleeting, they are also treasured, and what makes the hard work and dedication worthwhile. For many coaches, it is what they love most about their role.

For consultants, it isn’t all that different. There are still those special moments when it all comes together and the dedication to the role delivers a “life changing” experience for the client. Performance Consultant Patrick Rufo recently shared one of these very moments with us. 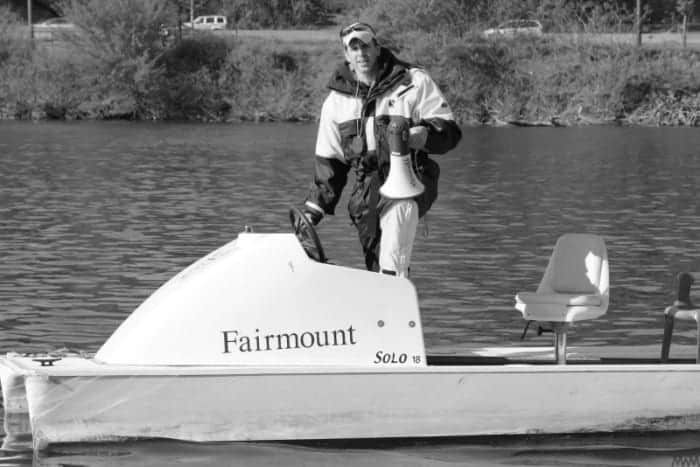 During a recent seminar, DISC2k – “Are you Ready to Master the 2k?” held in Philadelphia, PA for a group of athletes and coaches, Athlete William H. had a significant realization about what was holding him back from achieving peak performance. He described what he learnt on the day as “life changing”.

Patrick’s seminar focused on the participants AthleteDISC and CoachDISC Profiles which were completed in preparation for the day. Patrick extended the content to also cover the application of their results to their personal performances.

“After presenting and debriefing their DISC Profiles, the discussion moved onto how athletes and coaches “perceive” their need to act a certain way. One of the athletes admitted he had been under a lot of stress over the last few years, and realized that it had been affecting his training and racing performance significantly,” Patrick said.

“When he realized he had been focusing more on his teammates and pleasing everyone, and not on his own success, a “light bulb” went off.”

As it turned out, this individual was making adaptations away from his natural style of behavior with the intention of better fitting in with the team. This came at the expense of his own performance and had been holding him back for a long time.

The athlete credited the seminar with allowing him to finally focus on himself and his own training. He would always be a good teammate, but when it came to training and rowing, he would change his focus to benefit and improve his own performance. A major realization for the athlete was that one didn’t have to be at the cost of the other.

Patrick said this was exactly the type of response he was looking for.

“As a consultant, due to limited time, it can be very difficult to connect with a client or athlete during training sessions, and the time in the seminar allowed for this reflection and personalized assistance,” he said.

“It is often the case that a client or athlete may bring outside stress into a session that you have no control over. They may also be feeling stressed about their sport, and you do not realize they feel this way because they are trying to behave in a way they are not necessarily comfortable with. Even if the adapted behavior is positive, it still may not be what they are comfortable with.”

During the seminar, Patrick was able to work through this situation with the athlete, not only for the athlete’s benefit, but also for the other participants who were able to contribute and learn from the example. By assisting the athlete to understand his natural strengths and how he can use these to his own advantage, as well as for the benefit of the team, an enormous weight was lifted. It was as if he was given permission to be himself.

This is an important application in behavioral profiling. Our aim is to provide an environment where the individual can bring their own value, make their own contributions and perform to their own strengths. It is about achieving success in their unique way. This can be incredibly powerful within a team environment when each athlete understands their role and how to contribute their strengths. 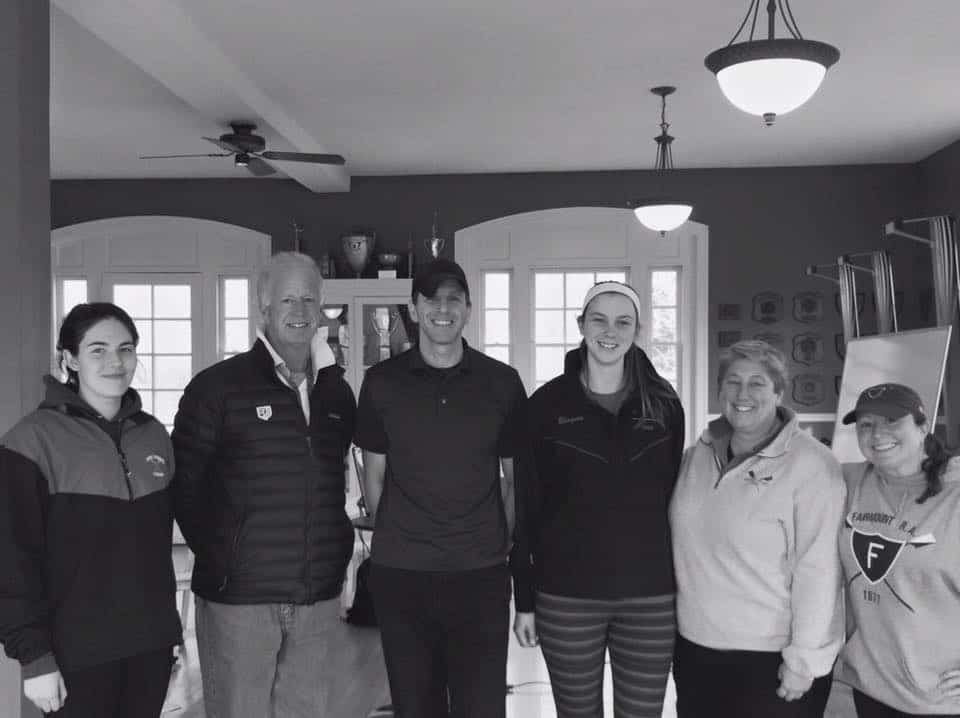 Making Adaptations in Sport with DISC

An equally important application of behavioral profiling is knowing when and what adaptations are necessary for the demands of the sport or situation. These types of adaptations can be made through coaching and can be a deliberate and practiced strategy.

In reality no one naturally possesses all behaviors required to obtain great results in all situations. The most successful individuals understand what they do well and they understand how to make necessary adaptations in order to suit the situation or changing conditions with the aim of achieving better results.

Unfortunately, the type of adaptations being made by the athlete in Patrick’s seminar came at a cost to his performance, and ultimately the team’s performance, while causing the athlete a great deal of personal stress.

If someone is making significant adaptations away from their natural behavioral preferences, it will have a certain energy cost. Energy is needed to make these changes and it has to come from somewhere else. In the case of an athlete, often this is away from their personal performance. In contrast, when an athlete can behave in a way that is consistent with their natural behavioral preferences, it feels effortless and their entire energy can be put towards their performance and contribution to the team. 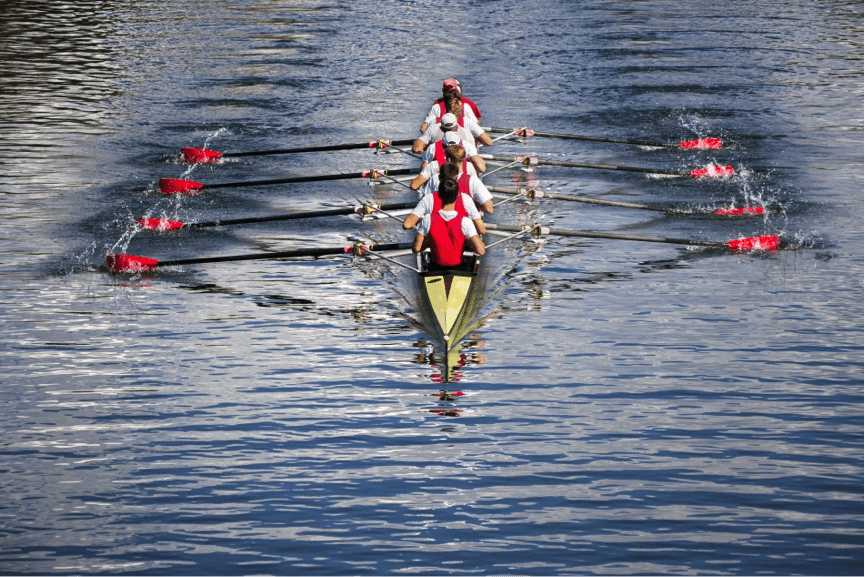 Within the DISC framework, the athlete at Patrick’s seminar presented as a ‘high D’, measuring high in the Dominance style. What this means is that he is naturally driven by results, is assertive and is at his best when driving performance in himself and others. Essentially, in making the significant adaptation to focusing all of his effort on his “teammates and pleasing everyone”, it was drawing energy away from his performance and contribution to the team which came at a huge cost by causing him stress and affecting his training. Essentially, the athlete was experiencing an energy cost. Knowing the difference between your Natural and Adapted DISC Style, and more importantly, knowing when to use them, is crucial for high performance.

Patrick was first exposed to DISC while working with a Physical Therapist who specialized in helping competitive golfers.

“He would offer the DISC Profile to clients who were having trouble with their mental game. I was privileged to sit in on the consulting sessions, and was impressed by how the DISC Model could help the client change their behavior and thought process when approaching their sport,” Patrick said.

“I had experiences with another profile, which focused more on communication, and teaching people about their “pure” personality type. In researching DISC, I came to understand that it differs significantly as it is a behavioral model.

“I had read an article on Bo Hanson when he first spoke at the US Rowing Convention about DISC, so I looked up Athlete Assessments. I signed up to be trained as a consultant because I felt it would enhance my current job as a strength and conditioning coach and rowing coach.

“Through my training I realized that AthleteDISC and CoachDISC could be delivered faster and had a much quicker impact on my clients and athletes because it did not question the client’s “root” personality. Instead it focused on changing their behavior.

“In using AthleteDISC with my athletes I have already seen a huge difference. It makes things simple for the athlete because they realize they don’t have to “act” a certain way, especially when achieving MORE success. Through my own profile, I realized that I was “pressing” for results and not tapping into my strengths as a competitor. I attribute this to part of my downfall in falling short at the 2008 Olympic Trials, and I now use it as a good story going forward when teaching others.

“I feel that AthleteDISC and CoachDISC have been the missing components in me finally connecting with my clients and athletes. Having the ability to truly build up and highlight their strengths in a short amount of time leads to great success in the long run.”

One of the reasons DISC is so successful as an assessment tool is that it focuses on behavior rather than personality. While personality plays a major role in how someone behaves, it is more about who you are while behavior is about what you do and how you act.

This is important because someone can change how they behave but they can’t (under normal circumstances) change their personality, at least not quickly. In essence, behavior is flexible, personality is not.

It is also easier to counsel, coach and create lasting change based on behavior. For example, we cannot ask someone to change their personality, but coaches constantly ask athletes to adjust their technique or what they do, essentially they are asking their athletes to change their behavior.

Simple Explanation of the DISC Model 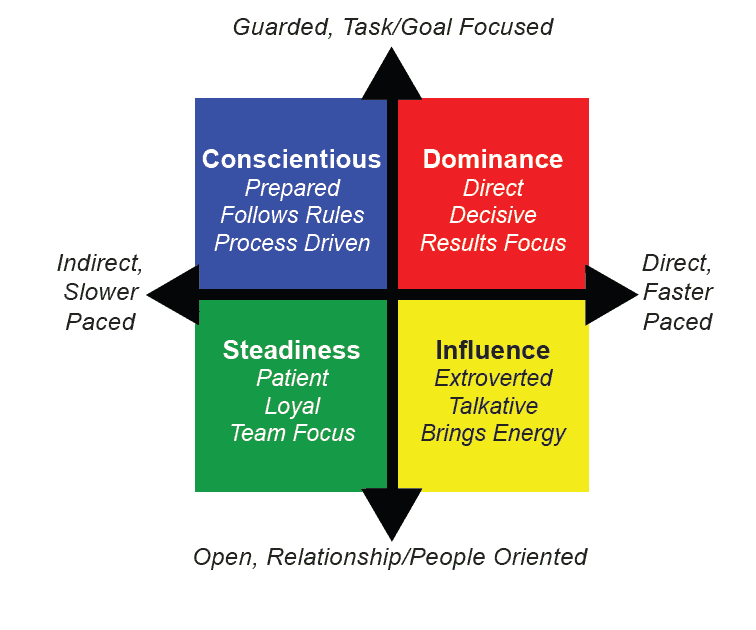 Personality tests claim that certain personality types are stronger in sport and in leadership roles while behavioral models say there is no best profile. At Athlete Assessments, we have profiled some of the world’s best and see no pattern for who is more or less successful based on personality.

With behavioral models such as DISC, you can delve deeply into the theory and application, yet at its core, DISC is a simple four quadrant model. This is critical in sport for coaches and athletes to quickly understand, remember and use. Personality tests such as MBTI are psychometric assessments and are more complex and require extensive training to administer. Yet they don’t have higher validity or reliability than DISC.

Successful consultants like Patrick know the defining factor for high performance isn’t technical or physical ability, it is ALWAYS about managing the people side of sport.

Patrick Rufo is from Wilmington, Massachusetts in the United States. He rowed for four years at the University of Massachusetts at Amherst and graduated in 1999 with a BA in Sociology. In 2006, Patrick moved to Philadelphia, PA to train full time for Penn AC Rowing Association. He competed at the 2007 Pan American Trials in the Men’s Straight Four and 2008 US Olympic Trials in the Men’s Double Sculls, finishing 3rd and 10th respectively. Patrick attended the National Personal Training Institute to become a certified personal trainer. He then began coaching at Penn AC and took over the Penn AC Junior Men’s Program. By 2011, Penn AC Gold became one of the top high school summer camps in the country. The program educated high school athletes on how to prepare and train properly, as well focusing on developing individual leadership and team building skills. Patrick continues to coach Masters Athletes for Fairmount Rowing Association where he works with athletes of all abilities and fitness levels.

Rufo Optimal Workouts® or R.O.W. ® was established in 2011 as an athletic consulting company. Patrick is a strong believer in “process coaching” and has a passion for helping his clients integrate health and fitness into their daily lives. Patrick also works as a counseling associate for Sparks Consulting which provides college consulting for high school athletes that are interested in being recruited in the sport of rowing. He serves as a coach and Director for Sparks Summer Camps.

Patrick is a permanent resident of Collegeville, PA where he resides with his wife and two daughters.

For more information or to connect with Patrick visit www.rufooptimalworkouts.com or his Facebook page, https://www.facebook.com/RufoOWLLC