“Showing up” on the People Side

When it comes to wheelchair basketball, few have experienced the success Stephanie Wheeler has in her extensive career as a player and now Head Coach. Recently, Coach Wheeler took the University of Illinois all the way to the Championship game. We had a chance to catch up with Stephanie and to ask her some questions about her approach to becoming successful in the Coaching environment. 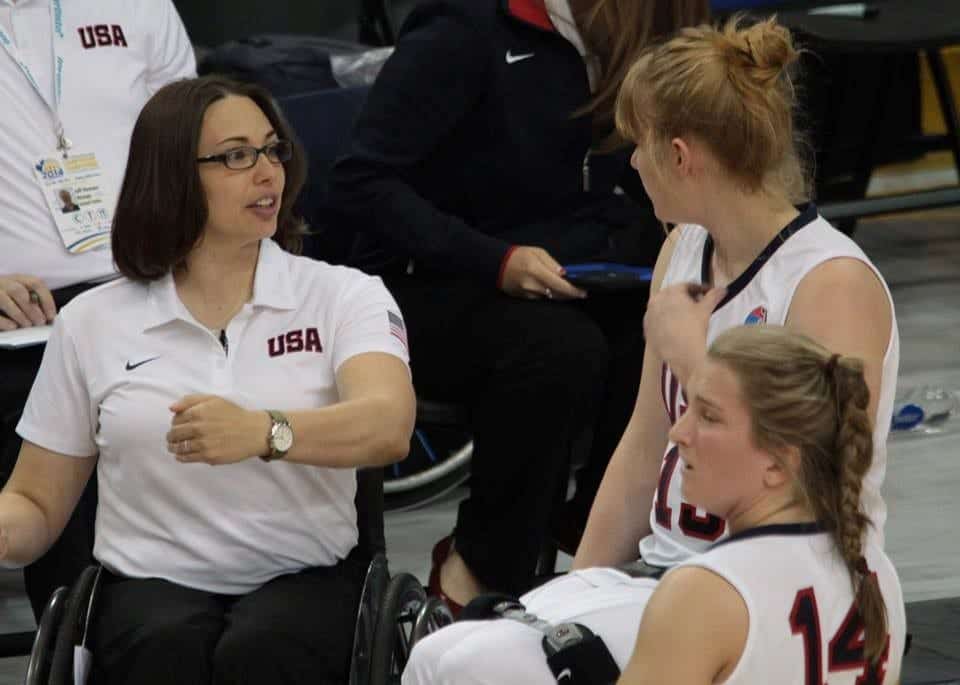 Beyond coaching technical skill, what do you see as your roles as a Coach?

What has been your Career highlight so far?

My career highlight so far has to be making it to the national championship game this season.  The core of this group of student-athletes has been together for 4 years, with many of them entering our program as very talented but very raw basketball players.  They endured seasons in which they lost games by 30 points, but always understood the big picture of what we were trying to do because they bought in to the culture of holistic development that we have at Illinois.  Because of the 4 years of hard work and dedication to the process that we followed (educationally, athletically, and personally), their overall skill set allowed them be rewarded with an opportunity to play for a national championship.

What was one thing you changed in your program from last season to this past season that made the difference?

One thing that we changed is we put more of a focus on the people side of sports.  We focused more on our character and how we treated each other on and off the court.  The athletes understood that they needed to build relationships off the court before we could be successful on the court. I think that had a direct impact on our success on the court because we built a trust among each other.  Each team member had their teammates back, so to speak, so the level of our play increased dramatically. This allowed us to be an incredibly resilient team as well. When the team made a mistake, we trusted that the team had each other’s back, we stayed confident, and were able to move forward to playing the next play.

How would you describe the culture of your team aspires to live?

Our team culture is one of excellence in all we do academically, personally, and athletically.  It’s grounded in respect for the tradition of this program, respect for everyone who laid the groundwork so that we could be a part of something so special and respect for and acceptance of each other in all that we do. It is also a culture built on bringing out the best in yourself and in others at all times because each team member brings something necessary and unique to our team.

How do you recruit new student-athletes to fit this culture?

Usually in the very first conversation I have with a prospective student athlete, I talk about the way that we do things at Illinois…our culture, our tradition, our standards that we live by.  I make our team culture the highlight of the recruiting process because either when they are talking to me or visiting our campus, they see our team culture embodied in our student-athletes and staff. I also listen to the questions that the prospective student-athlete asks.  If the only questions they ask are about playing time, money, or what gear they are going to receive, then our culture may not be the best fit for them.  Lastly, I watch how they interact with teammates, coaches, or people in their lives.  I think what I see in those instances tells me a lot about how they will treat the individuals in our program, and that’s very important to me, as it’s a big part of our team culture.

What advice would you give someone starting out in their coaching career?

The advice that I would give is to invest time in the individuals that you are working with.  The more that they know you care about them, the more they will allow you to push them to their limits and challenge what they think is possible.  The other piece of advice I would give is to know what your core values are as a coach and live by them each day.  There are so many things in the coaching world that can get us off track, but our core values are always with us and guide us through the good and the tough times.

Can you share an ‘ah-ha’ moment in your career?

An “ah-ha” moment in my career was when I had the great privilege to attend the Women’s Coaches Academy.  I never knew how important it was to have a circle of incredibly supportive women coaches surrounding you as a coach, but I quickly learned at the academy.  I learned that we are not successful alone, and since that time, I have been able to reach out to many coaches I met there to share ideas, gain knowledge, give and receive support, or just talk.  It was not only an “ah-ha” moment, but a completely career changing moment as well.

Do you have a favorite quote or saying that you draw on?

This season, our team used “You can pretend to care but you can’t pretend to show up” to guide our decisions.  It’s so easy to say how dedicated you are to the team or how much you trust your teammates, but the real message is sent in how you “show up”.  We talked a lot this season about what it means and looks like to “show up” with your actions, body language, and behaviors and not just your words.  I also applied it to my coaching…how did I want to “show up” each day.  The team did an activity with Bo in which they had to visualize how they wanted to “show up” to practice each day.  Once they were in their basketball chairs, they had to block everything else out and bring that player that they imagined before practice started.

How has working with Athlete Assessments contributed to your program?

Working with Athlete Assessments has been invaluable to our team culture because our student-athletes were challenged by Bo to be vulnerable with their teammates, to recognize and acknowledge what makes themselves and their teammates great, and to understand how their behaviors directly impact the ability of our team to be successful.  This challenge was game changing for us because I think we were at a point where our technical skills on court weren’t going to improve the way we needed them to unless we invested in the people side of the sport and connect with one another in a way that we hadn’t before.  The trust we developed amongst the athletes this season allowed our technical skills to grow in a way that they wouldn’t have if we were not working with Bo and Athlete Assessments.